When one thinks of the London Docklands of today, images of the superstructures situated in Canary Wharf come to mind. Yet, there are multiple impressions of the old, some more obvious than others, that run parallel with the new.

Debate on modernity has often been controversial as its definition in literature is both full of ambiguity and totalisation. One such totalising idea that shapes modernity is the understanding that ‘the modern’ is simply ‘the new.’ The aim of this photojournalistic article is to rebut this totalisation by contextualising the modern in urban form and argue that such a definition is reductive and devoid of meaning. Instead, I suggest that the chronologically new and old coexist to give renewed meaning to space.

Taking the photo above for example, on first glance the juxtaposition of what is chronologically new, the London Marriott Hotel (right), against the old warehouses of the West India Docks (left) stands out immediately. The intuitive point is made that modern places retain elements of history, but more significantly, the warehouses have been converted into restaurants and art shops that support the functions of the site, providing food for both those working in the Wharf and tourists, retaining its façade.

While it is easy to simply dichotomise the place as an old structure with new function that symbolises progress and modernity, this understanding is unable to reflect the cultural meaning that such an iconic site may convey. Does it function to communicate nostalgia, or is it a mere stage in the evolution of urban form? Does the place evoke superficiality or a sense of genuine cultural preservation? And to whom? In this light, characterising the ‘modern’ as the ‘new’ overlooks such essential questions of place, and thus refuting the discourse of the modern and its representations does not seem entirely out of place. 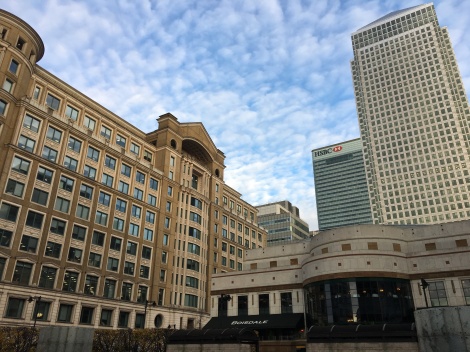 The above photo, taken from Cabot Square, presents another angle of how the old and new produce and reflect meaning in space. On the right stands the famous One Canada Square, otherwise known as the Canary Wharf tower, next to another modern skyscraper, the HSBC building. The more classicist North Colonnade (left), was almost certainly inspired by the façade of the warehouses in my earlier photograph. It is interesting that these buildings with vastly different aesthetics were constructed during approximately the same time period. This deliberate desire to evoke history in our present time reveals the complexities of portraying modernity, as the old and new constantly interact with one other. It challenges humanistic discourse of the modern as a ‘novel experience,’ as our present human experiences are almost certainly influenced by impressions of the old.

The final image I want to present is of the vision of coexisting functions of both old and new operations. In the above image, the Docklands Light Railway is pictured running right through 25 Bank Street, currently occupied by JP Morgan Chase. Since it began running in 1987, it has continued to serve the people in Canary Wharf right through to today and impressively throughout the construction of the neighbouring buildings, which were completed in 2004. Thus, discourse of modernity which associates ideas of enlightenment and progress does not necessarily require the sacrifice of the old. Rather, the old can complement progress and enhance the meaning of a place.

These complications extend beyond architecture and the functions of the place, it would be remiss of me not to highlight how modernity and gentrification exist uneasily within the historical narrative of the Docklands. Thus far, I have questioned the discourse of modernity. This may be seen as an attempt to completely blur the lines between the present and the past; it is not my intention to do so and it would be delusional to claim that the meaning of the place has remained unchanged for people who once occupied and those who now occupy the space.

However, it is through understanding precisely the fact that cities are ongoing narratives without fixed order of process that gives hope to those who have suffered. The quest for justice does not end when the glib skyscrapers or luxury condominiums are built. Instead, cities are performative, fluid and can be altered. It is with such comfort that we pursue the continued creation of new meanings, hopefully for the good of the people, over time.

All images by Joshua Hia ©

This website is run by students, with the support of the UCL Geography Department. Opinions expressed here are not necessarily those of the Department or UCL.

Please get in touch by emailing: bloomsburygeog@gmail.com